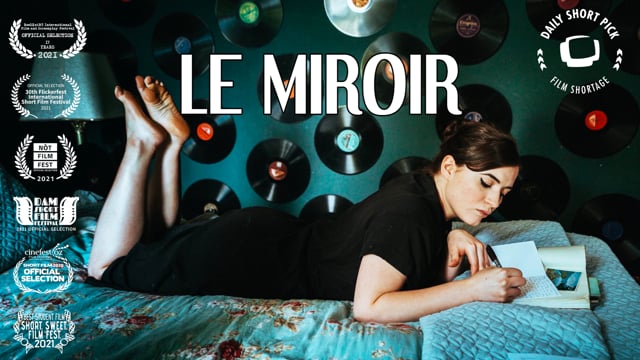 Short Film of the Month August 2022

By Leila Murton Poole with 7.1

sotm
‘Le Miroir’ is a wonderful romance, magical in its visuals, storytelling as well as thematic concerns, with an otherworldly existence that two women lead. Mathilde and Madame B have both known love, loss and heartache, and now find the tragedies of the past an overpowering presence in their lives, one that shapes and molds all of their actions in the present.

The portrayal of this premise is achieved with a stroke of fantasy, but as any enduring fantasy tale, very rooted in the real world, and in this case, one that is defined by grief, pain, and eventually finding one’s voice and the ability to use it. The movement of the narrative from the moment when Mathilde stops speaking following the death of her parents, to when she utters her first word, involuntarily and in the wake of an accident, forms the completed trajectory of its core underpinnings.

At the heart of it all is the lovely motif of a mirror, along with both its fragility and resilience, and the unexpected paths it takes our protagonist on. The storytelling in itself is marked by a beautiful, shared female space, whip pans and sets which are any art department’s dream, further bringing to life the humor reminiscent of a Wes Anderson film, and an overall atmospheric quality of European cinema.
Read Less