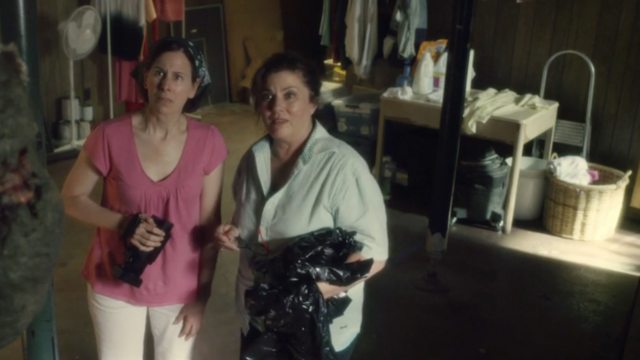 Simply within the first few minutes of The Scary Ham, the viewer is introduced to varied situations, lighthearted and strangely disconcerting in their own manner. However, a single object that remains crucial to them - be it a commercial with a family capable of inducing notable unease with their broad grins, or another family and a video documentation of their celebration of an important day - is ham.

Once the object and its significance in the plot has been established, there is a leap of a couple of years and we are then introduced to a single afternoon when two sisters empty out their old house after the passing of their father. From their mother's memory book and a piece of ham left hanging in a forgotten corner of the house decades ago, to the quiet, but determined rejection of getting rid of their parents' old paraphernalia, the narrative gradually, but succinctly conjures it all.

Based on a story by Ellen Klages, combined with the director's own experience of loss and consequent grief, the film invokes a plethora of emotions that span humor, endearment, a longing for the past, and the eventual moving on, even in the face of the tempting invitation of the memories of a time gone by. The final result becomes a paradigmatic example of a calm portrayal of primarily a single day in the lives of the sisters, and yet, allows itself a notably varied emotional range, ensuring that the viewer always finds themselves beside the two, deeply involved in each situation.
Read Less