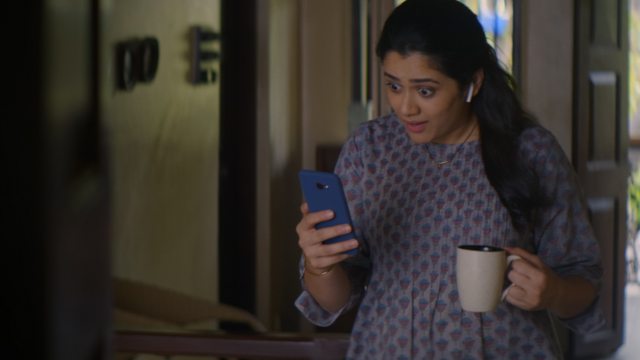 By Bonobo Pictures with 6.7

Bright blues, yellows and greens take us into the world of 'The Confidant'. The story of a homemaker, the film constructs for us a space that is lighthearted and cheery, and very much deceptively so. The direction and the eventual aim of the narrative is indeed far from that, drawing our attention to a very important social cause. However, before we delve into the darker realities, it is important to acquaint ourselves with the protagonist - a woman who exudes effervescence and a zest for life.

Through the series of conversations she has with an unnamed, unknown person on her phone, we see the first hints of an existence marked by loneliness and isolation in a seemingly loveless marriage. It will be this very tone of emotional emptiness that will be echoed throughout, despite the visuals conveying otherwise.

As these two contrasting realities - that of energy and bleakness - overlap, the final intention of the film is realized. The narrative reaches fruition, the plot is complete and the viewer is finally allowed the truth about the unnamed person who has been the protagonist's companion all along.
Read Less