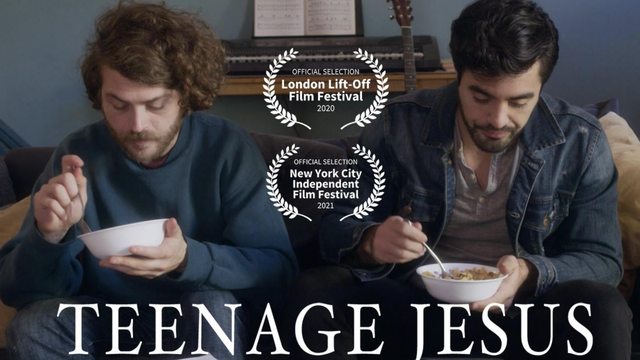 By Aaron Sheer with 7

It is a fact universally acknowledged that if there is a shrieking kettle present in a scene, something is about to go awfully wrong. First the film establishes its premise for you - two friends, Norman and Kevin, trying to get their musical its stage debut, while the former struggles with financial troubles. However soon after the crux of the plot arrives, with the aforementioned kettle in tow, when Norman finds himself in the most unexpectedly morbid situation. While it holds the potential of making his money worries go away, it is a deeply disconcerting situation for the viewer.

The most notable aspect of the film lies in the same nonchalance it consistently imbues to all the varied circumstances, irrespective of their location on the emotional spectrum. This allows it an effervescence, a sense of lightness, that stays with you long after you're done watching the film. It is precisely for this reason that even though things might be spiralling into absolute chaos for the characters, there is still humour to be found in the narrative, albeit at their expense.

At the end of it all there simply awaits the realization that despite several forces, unlikely developments, the musical in itself and the constant tussle of the undercurrents present within the film, the overarching thought that ties them all together is the friendship of Norman and Kevin, which perhaps then becomes the real protagonist of the narrative.
Read Less