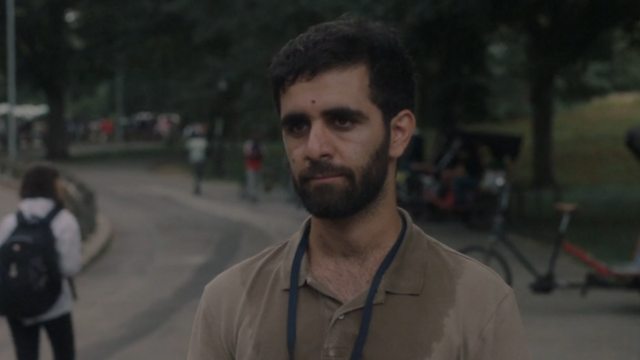 By Suzanne Andrews Correa with 7.5

The narrative is simply the capturing of a moment in the lives of two immigrants who happen to be brothers. The vulnerability and plight of undocumented people is delineated most delicately in this film which does not use the inherent sentimentalism of such a situation as a crutch. Instead, it manages to portray a point of crisis in the lives of the siblings which happens to be a product of their national and cultural identity.

The story opens at a point when the Turkish brothers have been recently reunited. Consequently, the younger brother Samet has more than a few lessons to be learnt about life in the big city. Elder brother Abi is protective of him, yet is wary of making him too soft that might leave him unprepared for the vagaries of the mini-universe that thrives in New York. The film does the most poignant, subtle and nuanced job of weaving together the anxiety, insecurity and uncertainty of fate for a pair like theirs, along with the very brazen realities of the world that includes racism, hate crimes and a strong, inherent sense of self-preservation which both lurches the brothers forward in their lives, as well as lands them in a deeply undesirable situation.

Green manages to achieve all of this and more, without explicitly spelling out any of it. It puts together a narrative about a person's engagement with a foreign environment, and interacts with situations where revealing your identity, even if to seek the absolute urgent help, is a fate worse than extreme corporeal harm. It further becomes a strong comment about the lives of undocumented immigrants not simply in New York, but also in other parts of the world, where the risk of deportation is a dominating, looming presence that threatens to consume all sense of security, safety and the accessibility to the most basic human existence.
Read Less