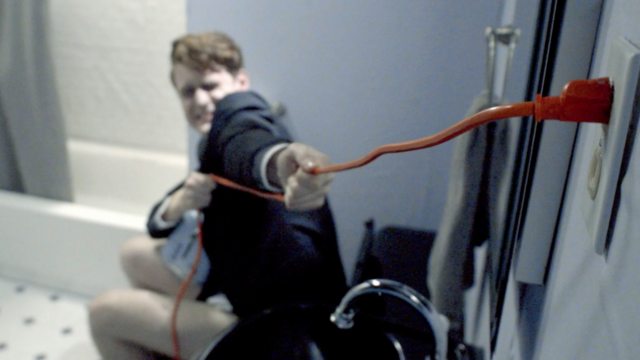 By Boris Bilic with 7

The short film is undeniably beautiful in its eccentric and refreshing treatment of a topic that has been attempted an engagement with countless times, making the possibility of banal or lacklustre content around the same extremely likely. Dumps, on the other end, steers clears of this effortlessly and in a manner worthy of all your appreciation.

The film opens with a black and white palette, instinctively placing things in neat categories for the viewer - of sadness and gloom, and other emotions that remain beyond the protagonist's reach. A note is left for 'dad' on the table as he progresses to the bathroom for the next step - his suicide. However, the most unexpected development ensures that things are completely thrown off-course, the neatness of the plan evaporating, as emotional complexities and nuances come to dominate the messy, wet scene of a toilet marked by a toaster, an overflowing bathtub, and well, the protagonist stuck to his toilet seat.

While encouraging a conversation on mental health and suicide, the film also addresses patterns of self-sabotage that an individual might be subjecting themselves to, consciously or not. Tight close-ups, sophisticated comedic moments entwined with the darkness of the theme and a unique interaction and interpretation of mental health issues ensure that the narrative is tight, engrossing and impactful in the message it wants to communicate, along with allowing an enriching viewing experience to its audience.
Read Less