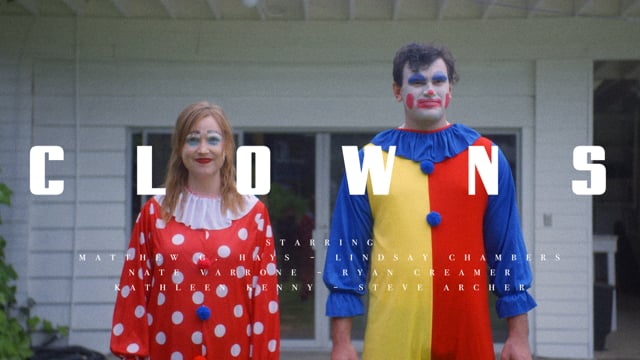 By Kevin Tosi with 7

sotm
'Clowns' is an entertaining and colorful twelve minutes of chaos that is about to develop into violence and all things crazy right before your eyes. Bobo, accompanied by his apprentice, Daisy, arrives an hour early for the birthday party of a little boy. Equipped with their costumes, makeup and plans for rehearsals, the duo is all set for their act.

The unraveling of events has already begun within the narrative even before the viewer realizes it. It is the inherent suggestion of this unease which works most notably for the film. The result is an entertaining reunion of humor, lightheartedness, with a sense of something just waiting to go terribly wrong.

The emotional contrast also finds an echo in the visuals of the film, the bright colors of the clowns set against the quiet pastels of the background, their antics against the perplexed, unsuspecting parents of the birthday boy, the innocence of a birthday party against the violence that is about to unfold, and the aggression that is soon to be associated with entertainment meant for children. Additionally, all of the characters remain notable portrayals of the disarray and chaos they represent, eventually leading to a story which is engrossing and well-rounded.
Read Less