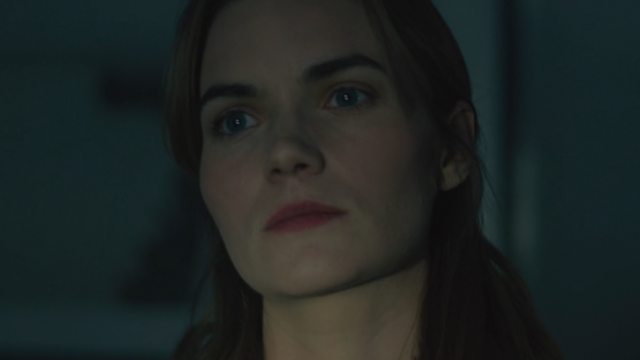 By John Robinson Irwin with 7

Set in a world that is dominated more by shadows than light, by an all-pervasive sense of despair than prosperity and by a potential crumbling of a familial structure as opposed to the intimacy one might associate with the space, Cera takes you headlong into its world right from the word go. When the film opens, a violent event has already occurred.

Our protagonist, John (Jason Isaacs) is in a desperate frenzy to get urgent medical aid for his wife who lies on the floor, bleeding profusely. Amidst it all, the overpowering presence of Cera never truly leaves the viewer even though she is absent from the visuals unfolding before you so far. The story develops gradually to reveal its dystopic world of artificial intelligence gone terribly wrong.

Of the film's setting and casting, director John Robinson Irwin says, "We shot outside of a small town, a couple hours north of Los Angeles. The logistics around getting a cast and crew of 20 people up there, finding a place for them to stay and keeping the budget around a level that wouldn’t break me, was quite a challenge. The fact that Jason Isaacs was delighted to be in the short was truly unbelievable. He was so humble and incredibly helpful throughout the whole process. It was marvelous to work with a true professional like him, someone with such an absolute love of the craft and a clear understanding of what makes a compelling story."

It is also worthy of note that though similar themes have been a subject of exploration previously in film and media, Irwin brings his own unique voice to the subject.

When asked what are the motivations behind exploring its darker aspects, he replies, "I have two kids and as I’ve watched them grow up, I’ve noticed how many apps, technology and devices we have to help our life feel a little more organized. There are all these new services and technology, but there’s also plenty of distraction keeping us from actually connecting with people. I realized I wanted to tell a high-stakes story of a family putting trust in the wrong places and only realizing the connection they’ve lost with those they care for the most."

It is indeed this dependency on technology that gets amplified and portrayed in John's young daughter Hailey's relationship with Cera, the AI caregiver of the child. As truly disturbing events come to be, perhaps orchestrated by Cera herself, the plot plants its feet firmly into the ground, ensuring the viewer has now reached a point of no return.

Interestingly, the film is intended to be a proof of concept for a longer project titled North End.

Irwin describes the latter as being "more focused on this family who has built a life around avoiding relationships, but is then forced to connect with each other after being flung in such a traumatic situation. John and Hailey’s best hope for survival is to stay on the water and get as far from civilization as possible until they know the extent of what’s happening... He’s just gone through hell to get himself and Hailey to safety and the hardest thing he has to do now is forge a relationship with his own daughter. As the two head further and further up river, they start to piece together what’s happening, and what they inevitably have to do to stay together."

At its close, the film presents to you the visuals of a despondent rural space as the father-daughter duo make their escape against a horizon dotted with aircrafts, ensuring that the question about their fate never truly leaves you, even long after you are done watching the short film.
Read Less