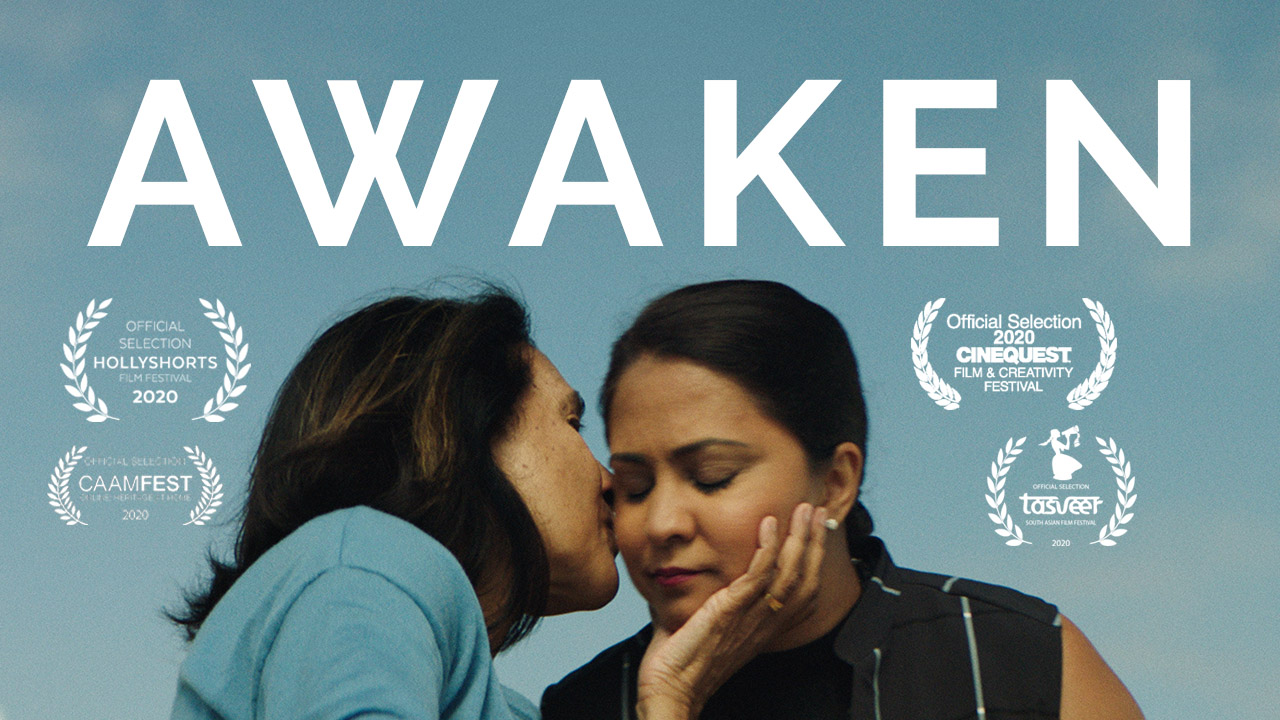 By Leena Pendharkar with 7

A mother-daughter relationship can often be a dynamic fraught with intense conflict and emotional complexity. A filmmaker dealing with such an issue would then have to tread the line between being authentic to the equation, and ensuring, at the same time, that their endeavor does not devolve into sentimentalism, melodrama or a space of banality. 'Awaken' achieves the former notably, and several factors, all skilfully handled, enable it in the pursuit.

Rakhi, played beautifully by Parminder Nagra, finds herself torn by professional demands and her duties towards her own family, while trying to find a safe space for her mother who battles Alzheimer's. It's interesting to see director and writer Leena Pendharkar to bring in mental illness into the foray, an aspect of the story which holds the potential of elevating it, if handled well, or taking it down a very different road, if not. The filmmaker explains the reasoning behind the decision.

"I wanted to explore how a daughter, who is already lonely and isolated, copes with her mother having Alzheimer’s disease. It is an incredibly tough disease, it robs people of their past and memories. Then if someone has a parent with this disease, it’s like they lose so many little things — conversations, past moments, love, and eventually, that support. This is what I wanted to explore in 'Awaken'—a woman is alone and isolated, but finds a tiny moment of connection with her otherwise “gone” mother."

The film perhaps then becomes about that one moment of awakening, the horizon of expectation having already been set in place by the title, that leads Rakhi to finally come to terms with the tough choices she would have to make not only as a daughter, but also a wife and professional in a high-stakes job. The mother she once loved, one capable of uplifting her, is now gone, leaving behind only a shadow of who she used to be. As heartbreaking as it might be to be chasing a past that will never be a reality again, it is in this very acceptance that lies the force capable of keeping Rakhi's life from collapsing, whether or not she realizes it right away.

Nagra explains her quandary further, "Like many working women, Rakhi is trying to be a master juggler. She is trying to be a daughter, mother, wife, businesswoman all at once. She simply wants everyone to be happy, and on top of it all, not having her sister to lean on is even more difficult. Even with these people all around, there is a sense of isolation. A feeling of having to do it alone when all you want is to be supported."

She indeed wants to be supported - by a sibling we never hear or see on screen (suggesting her blatant absence from Rakhi's life), her husband, and even her mother. However, what eventually awaits her is the truth that it is only a part of her own self that will truly allow for smoother sailing ahead. In that sense, Rakhi's story, located in a predominantly all-female space in this moment constituted by her mother, sister and herself, also becomes the story of several women who might be waging similar battles.

Nagra adds to it in the following manner, "I think the story puts the lens on a difficult subject - how it’s tough for families to understand such a thing. It’s not an easy job being a carer, making it hard to see out of that box when you’re in it, which is why it's important to pause and take in the whole view."

Pendharkar too agrees that even though the narrative might have allowed Rakhi a single moment of finally finding that strength and ease in her mother, who may have been an integral part of it all in the past, she is aware of the absolute need to move on from this transitory comfort. "We see that her mother might have been her support system, and just for that moment, she is, but once that moment is over, Rakhi has to return to making some very tough choices, with very little help or support from her sister and partner."

The filmmaker affirms that such a story of longing for that single instance of union with a loved one becomes even more stark in the failure to attain it, especially in contemporary times. In her case, a real life experience taught her this, along with the reality of a pandemic-stricken world. "I’ve watched my husband cope with his mom having the Alzheimer’s disease. It is heartbreaking, and we definitely miss those little things, like a meal cooked by her, or her funny jokes. I think as we age and grow older, we forget those tiny things our parents provide us, and the strange ways in which they support us. I made this film before the pandemic, but it feels so relevant right now as many people are far away from their loved ones or haven’t see them in a long time", she concludes.
Read Less