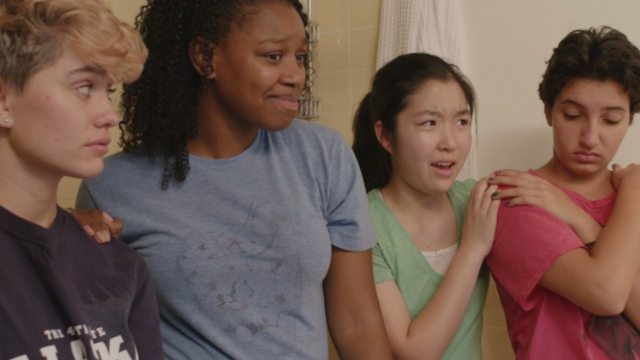 By Isabelle Platt with 6.9

A group of girls are on a sleepover in a suburban neighborhood and trying to fix a situation without getting the adults involved. The boy who is the sole cause of this situation is blissfully unaware of the events that are unfolding before you, as the narrative goes ahead to reveal. Since this is a situation filled with blood, secrecy, misguided shame and even fear, the last thing you would expect here is humor, which is precisely what the story brings in in an effortless manner, like an organic, most natural aspect of it. This remains the most well-sustained victory of the film throughout.

The story is about teenaged girls whose friend has had a miscarriage on their sleepover. Now while a mother awaits the group at an elaborate, hearty breakfast she has prepared for them, the situation has to be somehow brought under control. The narrative, once again, does a wonderful job of filling the moments before they all have to turn up at the meal table with deep tension and unease, and yet undercutting it regularly with laughter induced at the misfortune of our young characters.

Further, Player One becomes a lovely offering of an all-female space, authentic and honest in its delineation without bogging itself down with sentimentalism or corniness. The thematic concerns of the film remain subtle, but powerful in its quiet engagement with the anxiety of a young girl in the aftermath of a miscarriage, female friendships and a pivotal moment about ascertaining the share of responsibility in a chaotic situation.
Read Less